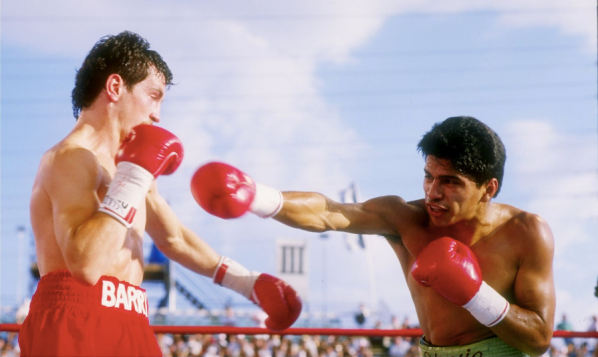 I was just going to post this appreciation of Barry McGuigan again – one of my favourite sportsmen – as a ‘lockdown read’ at a time when there’s so little sport around.

But it needed a new foreword.

He’s a man who has had to endure more tragedy in his life than most could ever understand, although reading his posts on his Twitter feed @ClonesCyclone you’d never know.

I’d urge you to follow him and take a look if you don’t already.

Las Vegas is the home of a million hard luck stories, high rollers and holidaying visitors alike parted from their cash in the desert temple to filthy lucre.

The searing heat of Nevada was the scene of a high stakes gamble by Ireland’s favourite son in June 1986, the next step for him on his march to global dominance.

But the odds were to prove stacked against him. A fight staged outdoors in the brutal conditions of a Las Vegas summer evening, one roll of the dice too many.

Barry McGuigan was without doubt the face of British boxing and much more. A unifying force across the divided communities of Northern Ireland, the public declared him their BBC Sports Personality of the Year just six months earlier.

His thrilling defeat of long-time champion Eusebio Pedroza on a never to be forgotten night at Queen’s Park Rangers’ Loftus Road still resonates as one of the great performances by a British fighter.

Two successful defences of his WBA Featherweight crown later and McGuigan had cemented his status as a fearsome fighter – his engaging humility in victory taking his popularity way beyond the usual boundaries of the sport.

The lure of a mega-fight with the intimidating WBC champion Azumah Nelson was looming large on the horizon for McGuigan as he landed in the US to take his bow on the world’s biggest fighting stage.

Destination Vegas. Dispose of journeyman opponent Texan Steve Cruz as expected and announce himself to the US public.

Bigger purses and universal acclaim would surely follow, as many thought was his destiny.

An outdoor ring in the car park of Caesar’s Palace Hotel was the agreed venue for his latest title defence.

The King’s Hall in Belfast – the scene of many a McGuigan glory night – seemed a long, long way away.

The fight may as well have been staged in the mouth of a blast furnace.

The thermometer ringside touched 43C – or 110F in old money.

A bank of 72 TV lights blazed down on the canvas.

McGuigan had spent weeks acclimatising for the bout in Palm Springs. But no warm weather sparring could prepare him for 45 minutes of world championship fighting in such brutal conditions at a furious pace which was the hallmark of all his bouts.

BBC broadcasting great Harry Carpenter, in a portent of what was to come, declared: “He’s been out here for weeks but I think when he gets into the ring he’s really going to feel it.”

A flurry of late betting revealed punters thought the Nevadan sunshine and dry desert air could significantly shift the odds in the challenger’s favour.

Weathered and durable, Cruz was to prove the nightmare opponent for McGuigan, whose all action, non-stop style simply wasn’t sustainable in sauna-like heat.

His bow in front of American fight fans – far from the anticipated curtain raiser announcing the new kid onto the block – was effectively career-ending.

But it shone a light on the man McGuigan is.

Three decades after last watching the fight, it was clear to me on viewing it again that McGuigan won it.

That threw me. I remembered it as a battle that slipped away from him in the middle rounds, one that saw him clinging on for dear life until the final bell.

But that wasn’t how it played out. Two calamitous rounds – ten and 15 – saw him felled three times. The majority of the other rounds were very much McGuigan’s.

The knock downs in the final three minutes undoubtedly swung the fight in Cruz’s favour on two of the judges cards, while the other inexplicably gave it by a four-point margin to Cruz.

The fight is compelling. In some ways McGuigan’s greatest, certainly his most heroic.

The outdoor arena makes for a strange atmosphere as much of the noise of the 15,000 strong crowd is dissipated into the evening sky.

But McGuigan’s supporters still manage to make themselves heard and his dad Pat’s pre-fight rendition of ‘Danny Boy’ brings a little bit of the King’s Hall to Caesar’s Palace.

Early doors, McGuigan is all over Cruz. An unremarkable fighter, he is three years the Irishman’s junior at 22 and with none of his pedigree.

The WBA’s number nine ranked fighter has a creditable 25 wins with a solitary loss to his name. McGuigan can barely remember what it’s like to taste defeat, on a 27 fight winning streak taking him to the summit of the sport with 24 of those opponents stopped.

From the outset Cruz is resolute, catches McGuigan with counters and refuses to buckle under regular assault.

Carpenter forecasts that the pace both men are setting can’t be maintained, emphasising just what is at stake for the ‘Clones Cyclone’. As the first round unfolds he declares: “This is a vital fight for McGuigan, this isn’t just to win but to look good in front of America.”

The first signs of the sapping effects of heat on McGuigan are in the sixth. A stinker of a round, Cruz wobbles him with a stinging shot leaving him dazed and out of tempo.

Both men are breathing hard and McGuigan’s timing of his shots seems awry.

A cut eye doesn’t stop his ferocious work rate though – working hard to hit and avoid being hit in the seventh and eighth and looking more assured in the ninth.

But the underlying effects of dehydration are causing him serious distress and famously it comes to the fore as his cornermen work on him before the tenth round.

But McGuigan implores his cornermen: “Say a prayer. Please, say a prayer that we’ll be alright.”

“No problem Barry.” McGuigan again pleads: “Say a prayer that we’ll be alright.”

Still 18 minutes left to overcome a man who would not be moved in conditions as alien as any could be to a Northern European.

His body wilting and mind clouding, he rises for the tenth.

After a decent start to the round, McGuigan is floored by a left hand, stunning him badly and he hauls himself to his feet on the count of eight.

The punishing heat is also sapping Cruz, too tired to follow up on his success but registering  a 10-8 round.

For the first time in the fight, McGuigan is back pedalling and looking desperately tired in the 11th.

But McGuigan’s heart and extraordinary conditioning remarkably sees him gain the upper hand in the next three rounds – a low blow though costing him a point.

Carpenter is in awe of McGuigan’s “superhuman” strength which drags him back from the brink, propelling him forward and taking the 13th and 14th rounds to give him “a big, big lead” in the estimation of the BBC man.

The final round is a disaster. Nearly three-quarters of an hour of high octane output has taken its toll.

The blows that fell him are not full-blooded, but enough to put down a man on the point of total exhaustion. The tank is empty.

God knows, the temptation to stay down and end his suffering must have been huge. But he gets up quickly both times and on he goes.

On buckling legs and with senses scrambled, he somehow survives to the end.

McGuigan’s body language speaks of defeat at the final bell, a 10-7 last round a crushing blow to a king who had expended everything in defence of his crown.

Ahead on two of the three judges scorecards heading into the final round, the knockdowns swung the fight decisively to Cruz, the unanimous winner and new champion of the world.

McGuigan is helped away from the arena by his team and stretchered to a waiting ambulance, tearfully acknowledging the applause of his fans. Apologetic, with nothing to apologise for.

The reason McGuigan’s fights still resonate for people of my generation is that we liked him so much. Still do.

A working-class lad, humble and brilliant. He fought in a style most could identify with and yet hit with a power way beyond what a nine-stone man should.

His career was extinguished as it burnt at its brightest. No recriminations from him though. Typical really.

Barry McGuigan was an elite-level boxer. And he is an even better man.