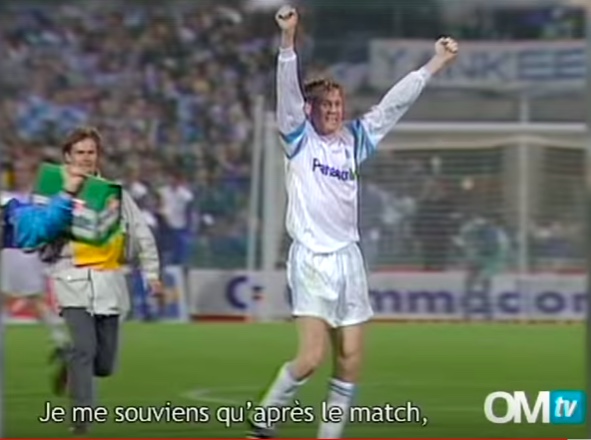 For many fans, Chris Waddle is the Geordie BBC radio pundit, prone to a post-tournament England rant, rounding off his vowels to make his analysis more easily understood.

He did actually play a bit back in the day. As a mate of mine remarked on Twitter recently, his football opinion is open for discussion, but what isn’t is his God-given talent for the game.

I was lucky enough to see him play many times for Newcastle United from his earliest days in 1980 through to rising star and England international.

Lauded but never loved at St James’ Park – adoration he would later find from supporters elsewhere – his unique playing style, permed mullet and how he came to life with the ball at his feet, marked him out as my favourite player.

Watching from a freezing, concrete Gallowgate End, a local lad exhibiting skills more associated with continental exponents, quickened the pulse and stood out like a duffel coat in the Bigg Market on a Saturday night.

Nearly 30 years ago, Waddle made a bold move which would allow his full talents to unfurl on the European stage, finding his football home in the unlikely venue of a Mediterranean French port with a reputation for its volatility.

Everyone needs a home, a place where they are totally at ease to express what they feel, a stage on which to perform.

It took Chris Waddle nearly a decade and a 1,000 mile journey south to find the place where he could fully remove the shackles imposed on him by the rigidity of the English game.

France’s Ligue 1 and Marseille’s Stade Velodrome were tailormade for Waddle.

A little more space, a little more time and crucially a licence to go out and “just play” gave him the freedom he craved.

But this was no easy Gallic joyride for the Geordie. Olympique de Marseille boasted a formidable side, packed with stars and a first team place was anything but assured.

Waddle’s creative mastery was coveted by owner Bernard Tapie as a key piece in his masterplan to build a team to win the European Cup.

Boli, Tigana and Stojkovic did the spade work to set Waddle free to exhibit his feints, shoulder dips, step overs and slalom dribbling which ignited Marseille’s quest for the domestic game’s biggest prize.

Such was Waddle’s impact that he was recently voted Marseille’s second greatest player of the 20th Century, behind Jean-Pierre Papin, the free scoring striker who fed off the five star footballing cuisine served up by the Englishman.

French President Emmanuel Macron, David Ginola and Thierry Henry have all cited his impact on their formative years in a Marseille side which caught the country’s imagination.

Flying under the radar back in his pre-internet homeland, focused as ever only on its own affairs, Waddle carved open all-comers in the French league and ran rings round top quality opponents in European competition.

For a big man without blistering pace and predominantly left-footed, the right wing didn’t appear to be his obvious home.

But that’s the position Waddle instructed his manager Gerard Gili to play him, able to cut inside onto his stronger foot – or go outside his man onto a right foot which dispatched AC Milan en route to the European Cup Final.

His stunning volley, scored while suffering the effects of concussion from hefty challenges meted out by Milan’s notoriously mean defence, is a thing of beauty.

Waddle’s unique brand of football was never fully appreciated back home in England.

Off the ball, a round-shouldered, seemingly off balance and disinterested spectator, he frustrated some but enthralled many more.

The outside of the boot was used as frequently as his instep to prize open defences and pick out centre forwards with precision crosses.

His ability to contribute more than his fair share of goals as an attacking midfielder/secondary striker made him a highly prized asset by the mid 1980s.

Waddle though struggled to replicate his club form at national level. A rigid 4-4-2 system stuck out on the right wing with no freedom to roam meant a series of below-par performances which got the ‘boo boys’ on his back.

But unlike Hoddle, a move to France imbued Waddle with the confidence to eventually express himself in an England shirt.

Italia ’90 – while unquestionably belonging to Paul Gascoigne – saw Waddle bloom on the international stage, his crashing drive off the inside of a post against West Germany agonisingly close to firing England into the World Cup final.

The first signs that a rough diamond was polished had come alongside Kevin Keegan, Terry McDermott and Peter Beardsley in the first incarnation of Newcastle United’s ‘Entertainers’.

Learning from these three stellar talents, Waddle would go on to play centre-forward for the Magpies as he matured into the black and white stripes.

He served notice to a national audience of his lavish gifts scoring a superb goal at White Hart Lane in a defeat to Tottenham in early 1985.

Waddle’s run and precise finish undoubtedly cemented Spurs’ determination to sign him – and they did just that in the summer of that year, much to the chagrin of Toon fans.

Some never forgave his move to the Big Smoke.

The Toon’s loss was Spurs’ gain and he began to fulfil a special talent first spotted and nurtured by Arthur Cox at St James’ Park in the early 80s.

The “sack of coal” Cox said hung from Waddle’s shoulders was finally removed and he began to revel in a Spurs team packed with attacking talent.

He supplied many of the bullets for Clive Allen to fire in his incredible 49-goal haul for Spurs in 1987.

Linking up with fellow Geordie and Newcastle-transferee Paul Gascoigne the following year gave Spurs a season to remember with sumptuous football from two of Europe’s supreme midfield talents.

Such was their potency that Gary Lineker was moved to leave Spanish giants Barcelona and head to White Hart Lane, drooling at the prospect of delivery from his England teammates.

Waddle, as he’d shown by leaving his native North East behind to move to the capital, was also ambitious and not afraid of making the big decisions needed to fulfil his goals.

A surprise close season call from France, a £4.5m fee – huge in 1989 – and the prospect of showcasing his skills in the European Cup English clubs were banned from – convinced Waddle and Tottenham that his future lay by the Mediterranean.

Playing in Europe is still a big deal for British players today. Thirty-years ago, leaving these shores for continental football was the preserve of an elite.

Few, like Lineker, cracked it. Far more – Ian Rush at Juventus, Mark Hughes at Barcelona to name but two – failed to replicate their proven talents on foreign soil.

A big money move at 28-years-old to an obscure club operating on the fringes of English football fans’ knowledge, appeared as bizarre a transfer as it was unexpected.

But Waddle was cut from a different cloth to most of his contemporaries, and soon had Marseille fans adopting him as one of their own.

Outsiders, passionate with a ferocious reputation, Marseille bristled at having to play second fiddle to arch-rivals Paris politically, socially, economically – and in football.

They revelled in Waddle’s joie de vivre on the pitch.

All flair, spontaneous, Waddle was etched into Marseille folklore with an audacious back-heeled winner against Paris Saint Germain in a first season ‘Le Classique’ derby at the Velodrome after chesting the ball down and lobbing the keeper.

His dismissal of the sophisticates from the North ignited the fires within a fan base desperate for success.

Waddle spoke little of the lingo. Just slowed down Geordie brushed with a French glaze.

But his connection to the fans was incredible. Traffic wardens waived scores of parking tickets in exchange for an autograph, drinks were never paid for and his haircut was sported by many a Marseille Ultra.

Three French league titles were reward for Waddle’s brilliance. But the ultimate prize of European champion was to elude him.

Pipped by an uber cautious Red Star Belgrade in a stinker of a 1991 European Cup Final was as close as he got to hoisting the trophy his contribution to the club surely deserved.

A series of dazzling displays en route to the final had most of Europe sitting up to take notice, all that is bar England manager Graham Taylor.

He flatly refused to name Waddle in his dour squad, insisting his style of play would unbalance the side.

Waddle’s England career was over at 62 caps, probably 20 short of where it should be. The victim as much of an English footballing mentality which ludicrously labelled him a ‘luxury player’, the national side consistently failing to embrace individuality in favour of power, discipline and pace.

Marseille would finally go on to lift the European Cup in 1993, building on the foundations laid down by Waddle.

Waddle himself was back in England, wowing Sheffield Wednesday fans with the full repertoire of skills honed in the Mediterranean sunshine.

A Football Writers’ Association Player of the Year Award at Wednesday was scant reward from the English game for a man who Match of the Day pundit Alan Hansen hailed as “worth the entrance fee alone.”

A cabinet full of silverware may have eluded him.

But Chris Waddle was one of that rare breed of ‘once seen, never forgotten’ players, a trailblazer for a new generation of English talent now looking to foreign shores to further their own careers.