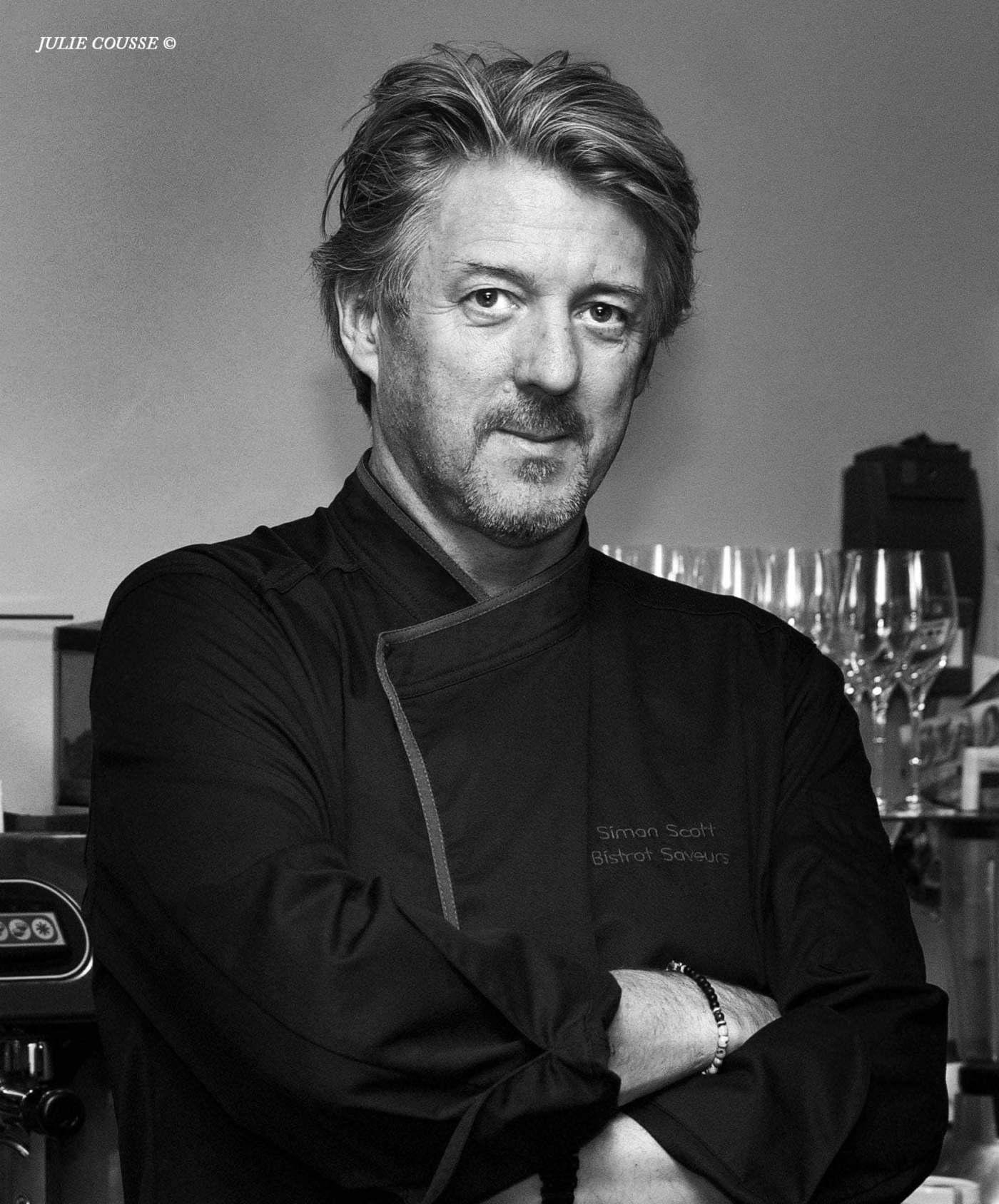 He looks every inch the confident French Michelin starred chef, living out his dream of running his own restaurant in a beautiful corner of south west France.

Only his surname betrays roots 1,000 miles distant from his business, a culinary journey beginning in Morpeth, Northumberland, heading due south via a stint as head chef at London’s Savoy Hotel.

Simon Scott is very much a part of the community he calls home in the gorgeous seventh century town of Castres – population just 45,000 but with a huge reputation as a rugby union powerhouse on the European stage.

Married to Marie-Helene for more than 20 years, they run Bistrot Saveurs with a team of eight, acclaimed by locals and beloved of rugby fans for the quality of Simon’s cuisine which earned the eatery a coveted Michelin Star just a year after opening.

It’s all a far cry from frying scampi and chips in the kitchen of the Queen’s Head Hotel in Morpeth as an 18-year-old lad, skiving classes on his cookery course at Ashington Technical College, keen to learn his craft cramming in extra shifts at the busy hotel.

Simon, 52, grew up in Crown Street, Morpeth, with his brothers Derek and Dale, taking his love of cooking from their mother Sallie who worked in the Rendevouz fish and chip shop, then sited next door to the Waterford Lodge Hotel in the 1980s.

“I suppose becoming a chef seemed quite natural as I helped my mam a lot bringing up three boys alone as unfortunately I lost my father when I was a young boy,” said Simon.

“And as mam used to work at the Rendezvous chip shop, I would help out cutting spuds and frying fish.”

It was in the Queen’s Head kitchen as a college student in 1985 that his passion for cookery was lit by the stories of colleagues well travelled and with contacts that would prove invaluable to his career.

“At the Queens I did more or less everything,” said Simon. “I often skipped off college to help out.

“The chef at the Queen’s, Derek Finlay, had worked in London many years previously and along with John and Peter Wilson, my teachers at Ashington Tech, both excellent chefs who also worked in London at famous hotels, they would peel off story after story.

“So coming to the end of my college year, John took me to one side and asked me if I would be interested in going down to London for an interview? ‘Yes of course!’ I bit his arm off!”

A week later and Simon was off down to London to meet chef Brian Steele at the Marriott Swiss Cottage, a good four star hotel, where he worked for nine months.

It whetted his appetite for more.

Working in London put Simon on a completely different stage where his nerve and self confidence were tested every bit as much as his culinary skills.

“I went to the Britannia Intercontinental at Grosvenor Square, Mayfair,” he said.

“It was a completely different animal. I went from the Marriott where I think we were about eight or nine chefs in the kitchen, to the Britannia where there were about 30 to 32 chefs, most with Michelin or big hotel experience.

“I was shitting it! I started as third commi (the lowest rank in the kitchen) and finished chef saucier, highest position below sous chef.

“I also met Marie-Hélène who would become my wife!”

A year, or two, in Provence

After three years at the Britannia and after gaining an advanced City and Guilds at Westminster College, the couple decided to go to France in search of work and a culinary dream.

“To cut a long story short, we drove down to Avignon, in Provence, with what little belongings we had.

“My old chef from the Britannia gave me a contact to go and see, his old chef Jean-Claude Aubertin, who had held two Michelin stars but had just opened his own restaurant called Aubertin in Villeneuve Les Avignon in Provence.

“It was a very small restaurant with 25 covers, great produce, markets – Jean-Claude was very creative and during this time I met many famous chefs. I was a bit of the odd one out, the English boy who wanted to do and know everything.”

Simon was lured back to London from the Gallic sunshine by an old colleague, now head chef at the Ritz Hotel who offered him the chance to work alongside him.

“It was too good to pass up and as Marie-Helene loved London too we decided to go,” said Simon.

“So we headed back to London but somehow I knew I would be back to France one day.

“I started as junior sous chef in 1993 but within a year I was executive sous chef, number two in the kitchen.

“I stayed four years when I got the chance to become executive head chef at the Savoy Grill in the Savoy Hotel – a great honour as I was only the third British head chef there in 150 years.”

Simon and Marie-Hélène married in 1998 , still holding onto the dream of returning to France to run their own restaurant one day.

“Then in 2001 I got itchy feet and during a summer holiday we came across this fabulous property,” said Simon.

“It was a 19th Century farmhouse in 15 acres of land, but the reality is not always as easy as the dream.

“We created Les Saveurs de St Avit and after six very difficult years, we were awarded a Michelin Star!”

At the time Simon was one of only two British chefs in France to hold a Michelin Star – the other being Gordon Ramsay.

“My dream was now a reality but business was still difficult as we were very isolated, 20 kilometres from town,” said Simon.

“So in 2009 we sold the farmhouse and found premises in Castres town centre and created Bistrot Saveurs which with great pleasure recieved a Michelin Star in 2010.

“Bistrot means a more relaxed restaurant, Saveurs means tastes. For me, my food is fine presentation with a melting pot of tastes.

“In the restaurant we are a team of eight, including two apprentices. The kitchen is semi open plan so all can see how we work as a team.”

It’s a decade since Simon and Marie-Helene relcoated to Castres in the Midi-Pyrenees region.

They’ve stopped working weekends, not just to savour the rugby at Castres Olympique but to enjoy a better quality of life.

The club lifted the French championship two years ago and Gallic greats such as Thomas Castaignède, Thierry Lacroix and Raphaël Ibañez have all worn their colours.

“We are huge rugby fans, but quality of life is very important for us and our staff,” said Simon, still a big Newcastle United fan who also dreams of the Newcastle Falcons meeting Castres in European competition.

“We have a very busy schedule Monday to Friday lunch and dinner, being in town we have a much more regular fan base if you like.

“We are fully booked lunches and busy dinners too. We change our menus every week according to the markets. I have no à la carte, just menus.

“Food is very important as you can imagine to the people of Castres.

“Busy markets, top producers, they come to me now to ask what they should plant for me which is very humbling.

“The rugby plays a big part in our lives, matches, events – most of the players come to eat so we all know each other well.

“Castres is a small town with 45,000 inhabitants, very much like a big village and if you think we get crowds of 11,000 most games, that’s how big rugby is in this region.

“Plus we’ve had three finals and championship wins in recent years. Their success coincided with our arrival in Castres so we’re looked upon as good luck!”

Social lockdown means Simon has time on his hands for the first time in many years and is using it to pass on his gastronomic flair to thousands of people via Facebook instructional videos from the Bistros Saveurs kitchen.

“With the Coronavirus, we’ve been closed for two weeks now on lockdown,” said Simon.

“We started to a Pasta Challenge amongst friends, making videos to help people during this difficult time and give them recipe ideas. I got over 23,000 views for my video on Facebook, that’s really cool and helps to keep us positive.

“In the early years it wasn’t always easy for me being an Englishman here as English food didn’t have a great name but that’s all changed now.

“I know they are proud of what I do, our Michelin star was the first in Castres in 43 years!”

So after nearly two decades living abroad, does Simon consider himself a Frenchman, or an Englishman?

“Yes very much English! I had a nightmare Six Nations this year in Paris with 15 French friends as you can imagine!”